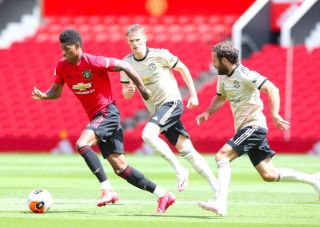 Manchester United players competed in a practice match at Old Trafford on Saturday as we near a return to Premier League action.

Manager Ole Gunnar Solskjaer split his squad into two sides to contest in a training game, in what was their first time on the Old Trafford pitch since the monumental derby victory over Manchester City in March.

Solskjaer will have his full complement to choose from on June 19 when United resume with a tough fixture away to Tottenham Hotspur.

Paul Pogba and Marcus Rashford have both used football’s unprecedented hiatus to return to full fitness after serious injuries and were among those pictured during the Saturday’s game.

Unfortunately, no footage has been released from the game but this is of course understandable with Solskjaer not giving anything away ahead of United’s crucial nine remaining league games.

Eager-eyed United supporters did notice that Pogba and Bruno Fernandes lined-up on different sides, with many anticipating their midfield relationship when football does return.

See some of photos below shared on many of the players’ social media accounts, posted by Utdreport:

Ig Shaw: "Felt good to be back at Old Trafford today 🔴👌🏼" [lukeshaw23] pic.twitter.com/AkkmTVtHKh