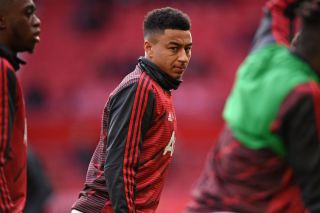 Lingard’s form has plunged in the last two seasons with many questioning whether it is time he moved on from the club he has been with since he was a child.

The 27-year-old has failed to register a goal or an assist in 20 Premier League appearances this term, and has fallen further down the pecking order after the inspired January signing of Portuguese playmaker Bruno Fernandes.

The Independent recently reported that Lingard is seriously tempted by a move to Italy to play in the Serie A, with AC Milan one of the clubs said to be interested in his signature.

And former striker Blissett, who left Watford for Milan in 1983, believes a switch could be vital in shaping Lingard as a player, as well as improving his England credentials for next summer’s delayed European Championships.

“From an education angle as a player, it’s brilliant to go and sample a different culture. It makes you a more rounded person,” he told the Daily Star.

“If that United team was challenging for the league, he’d have already matured a lot quicker. Other senior players would have been focussed on that end goal.

“Going abroad could definitely help as he won’t have people around that he’s grown up with. He’d need to work to settle in, not just in a team but in a new country.

“In the right set up – and with the right players around him – he’s as good as anyone in that position. He’s scored some important goals over the years.

“For him it’s about making the step from a young boy to a leader. He’s still in the transition, but he needs to be that player now.

“Moving will improve his England prospects and prolong his career at the very top.”

If Lingard were to make the move to the Serie A, he would follow ex-Red teammates Chris Smalling and Ashley Young who have made the brave switch to the continent.

Neither of the defenders were getting much game time at Old Trafford, and Smalling has particularly shone during a season-long loan spell at Roma.

It remains to be seen whether Smalling’s long-term future lies at United or if he will make his Roma move permanent.

Lingard could find himself settling for sporadic substitute appearances next season and needs a transfer if he is to guarantee more regular first-team football again.