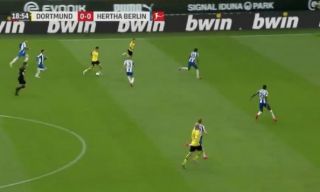 Borussia Dortmund winger Jadon Sancho has lots of tricks in his locker.

The England international has been strongly linked with a summer move to Old Trafford, as per The Independent, so we’ve been keeping a close eye on him since the Bundesliga restarted.

It took him 18-minutes to show a glimpse of brilliance against Hertha Berlin this evening, when he went on a fine run after picking up the ball deep into his own half.

Sancho saw the counter-attacking opportunity in front of him and surged forward before skipping past one Hertha player. In the opposition half he was surrounded by Hertha players and beat a further three before finding his team-mate with a pass.

I mean can we just take a moment to appreciate how Jadon Sancho just glides past players for fun?! 😍 pic.twitter.com/ZcAetGVJCl

According to ESPN, Dortmund value Sancho at €120m.

It’s a lot of money to spend but he’s genuinely one of the best young players out there.

With Sancho on the right, United would be lethal going forward so long as Ole Gunnar Solskjaer can keep his main stars fit.