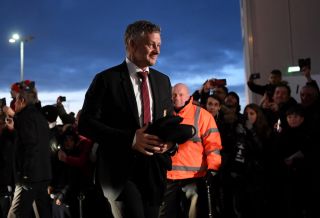 Manchester United boss Ole Gunner Solskjaer has revealed his plans ahead of the Premier League restarting later this month, confirming that he is keen to bring a winning ”edge” to the squad.

United face fellow top-four hopefuls, Tottenham Hotspur, on June 19 in their first game back since the coronavirus outbreak which brought the 2019-20 campaign to a halt.

Prior to the season being suspended due to the ongoing COVID-19 pandemic, United were enjoying a rich vein of form, having been unbeaten in their last 11 games.

Fans will be excited to see 22-year old Marcus Rashford return to full fitness from a serious back injury which has seen him sidelined since January.

New midfield duo, Paul Pogba and Bruno Fernandes are also set to feature together for the first time since our Portuguese Magnifico arrived at Old Trafford during the January transfer window.

Manager Solskjaer has spoken to ManUtd.com and highlighted the team’s excitement to get back to playing competitively.

“We’ve been looking forward to these games for ages really,” said Solskjaer.

“It does make it feel like ‘yes, we’re here soon.’ The first game is two weeks from today so we need to step up the training and get an edge to our game again.

“Everyone knows that we will have to be at our best, have to be focused [against Tottenham]. We know it’s a big game for everyone. We had Chelsea when we started the league this season so I’m confident that our players can go into the Tottenham game with that mentality of going there to play a very good game of football.”

Solskjaer has also admitted that some tweaks may be needed in order to get the squad back to the levels they were at before the country went into lockdown.

“Training has been about recapping what we did well, tweaking maybe one or two things and looking at some new ideas,” explained the young Norwegian, “but hopefully we can see a lot of what we saw towards the end before the lockdown.

“We’ve got games coming weekend, midweek, weekend for a spell so you have to focus on ourselves and not just on that one, first game.”

Solskjaer also addressed observations that the atmosphere among the squad is at an all-time high: “In any interview, I’d say, ‘Yes the mood is great and the spirit’s good’ but it has been really good.

“I think everyone can see over the last few months how the players have behaved and dealt with the situation and how we as a club have dealt with it. The players have kept themselves fit as well, which has been great.

“The weather was fantastic when they got going in small groups and gradually now, as we’ve got into contact training, you can see a little bit more of the edge but also the camaraderie and team bonding.

“That’s vital for me in a team,” reiterated Solskjaer.

“That’s one of the main things, that we are a team and the team goes before anything else.”