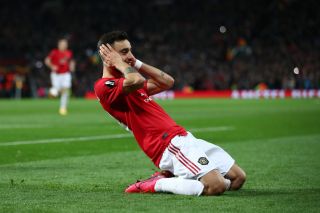 Bruno Fernandes has revealed that he cried with happiness after learning that his transfer from Sporting Lisbon to Manchester United was given the green light.

In an Instagram live with former Macedonian footballer Mario Djurovski, the attacking midfielder talked about his move to Old Trafford in January and how it represented a fulfilment of a lifelong dream.

“When I received the call saying, ‘Bruno, you have the chance to move to Manchester,’ I tell to my wife, I call my brother, I call my father, my mother and my sister, and I started crying you know!” said our Portuguese Magnifico, as quoted by ManUtd.com.

“But crying for happiness, because the chance you have… you fight all you life to be in a top club, in the top league, and he is the chance.”

Fernandes may be an established Portugal international at this stage, but he came a long way to where he is now and is set to be recognised as one of the best midfielders in football if his form prior to the coronavirus pandemic can continue when the Premier League resumes in under two weeks.

Growing up, Fernandes reveals he followed United since he was a boy and recalls arguing with his brother about the respective merits of Cristiano Ronaldo and Barcelona’s Lionel Messi. Little did he know he would become the former’s team-mate on the international stage.

“All my family, they know since the beginning, I want to be a football player,” he added. “As soon as I started to play, they knew my big dream was being in the Premier League and playing for Manchester United.

“The time of Sir Alex Ferguson was the time that I grew up and I watched. It was there my love started for Manchester United. Cristiano was coming here, but also other players you have playing here that were amazing players. I can be here all day if I need to nominate everyone!

“At that time, my brother was always a Barca supporter, because he loves Messi. And so we are fighting about Messi and Cristiano you know! I remember one time we went to Switzerland to find my dad – my dad was in Switzerland some years ago to work – and we buy a jacket. I buy a jacket from Manchester United, and he bought a jacket from Barcelona.

“We have the jackets in Portugal. I talk with my uncle to see if he has the photos with the jackets, but he says he doesn’t have. I will do a photo with the jacket when I go back to Portugal with my brother. He knows it was my dream to come here.”

United fans have a lot to look forward to with the return of football. We’ll finally get to see Fernandes and Paul Pogba together in the same team.