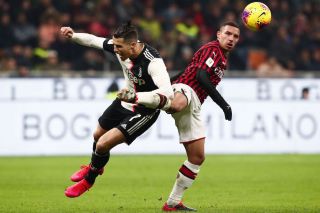 Manchester United have joined rivals Manchester City and Ligue 1 champions Paris Saint-Germain in the race to sign AC Milan’s Ismael Bennacer, according to a report from French outlet RMC Sport.

The report adds that United are the latest club to show interest in the Algeria international, who won Player of the Tournament at the 2019 African Cup of Nations.

A report from The Sun earlier this week suggested that City are interested in the midfielder, who made one League Cup appearance for Arsenal as a 17-year-old in 2015 and left the London club in search of first-team football before joining Empoli two years later.

Rather interestingly, a move to Old Trafford would see Bennacer become the first Algerian to play for United’s first-team, but we are some way off getting our hopes up about this transfer.

But I haven’t seen him play so I reached out to Sempre Milan editor Oli Fisher to get some thoughts on Bennacer. It’s a pretty detailed profile from his time at AC Milan.

Bennacer arrived last summer for a fee of €16m from Empoli without much to show aside from a string of impressive games in a side that got relegated. That expectation grew when he was named AFCON Player of the Tournament just before the season started and even before the deal was officially confirmed (but the reports were that it was all done).

He struggled to establish himself at first as previous head coach Marco Giampaolo went with the more experienced holding midfielder Lucas Biglia, a player he knew well from their time together at Lazio, but when Giampaolo was sacked after just 111 days Bennacer found his playing time and has been a starter ever since.

He is diminutive in size but not in his presence on the pitch – he seems to be literally everywhere because of his tenacious and aggressive nature. Bennacer does have his problems with discipline being the most booked player in the entire league, but at 22 the idea is that he can channel that tenacity better.

He’s also very good with the ball at his feet and driving play forward (but contributes little in terms of goals or assists), which makes me think he could play the box-to-box role better for us, just as he does for Algeria.

The presence of a €50m release clause has been confirmed by sources close to the club but it has to be paid in one single instalment. Time will tell if a team can justify paying that much given the market at the moment, but I’d say he would be more likely to join PSG or City at the moment – the former because their president wants him and the latter because of the Guardiola/Mahrez effect.

Like I said above, it’s too early to get excited about this one but Fisher does note that he would be more likely to join City or PSG in the summer than United.

Perhaps our name is being thrown around to give him a higher value in the transfer market?