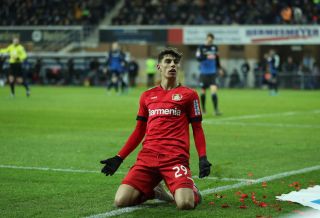 Ole Gunnar Solskjaer has the chance to accelerate his Old Trafford rebuild this summer if he is backed financially by the Manchester United owners.

The Norwegian boss will be aware that United need to bolster their attacking options as they look to close the gap in the league on bitterest rivals Manchester City and Liverpool.

ESPN report that United are prioritising a versatile forward after ending their hunt for a natural striker when Odion Ighalo extended his stay this week.

One player that fits that criteria is the coveted Bayern Leverkusen sensation Kai Havertz, who has been stealing all the headlines since the Bundesliga returned in mid-May.

Reputable journalist Christian Falk confirmed on twitter that United are looking to sign the German international, who turns 21 next week.

Havertz’s versatility is what might make him such an attractive option for Solskjaer, and a fantastic alternative to Jadon Sancho if they miss out on the Borussia Dortmund starlet.

The key question if he did make the switch to Old Trafford would be about where he fits into United’s system. Havertz has featured as a right-winger, attacking midfielder and false 9 for Leverkusen in his fledgling career.

While he would be effective in all three positions, Havertz could initially operate as an inverted right-winger, a problem position for United.

Havertz has registered five goals and laid on five assists from the right-wing this season, and could cut inside to provide more space for Aaron Wan-Bissaka on the overlap, with the young right-back growing in confidence when entering the final third.

We feel he would not be quite ready to oust the totemic Bruno Fernandes from the number 10 role after the Portuguese star’s brilliant United impact so far,  but he could do a more than adequate job on the right-flank.

Meanwhile, we have chosen the spine of the team that went unbeaten in 11 games before the coronavirus outbreak. Paul Pogba and Marcus Rashford return to the side as their creative qualities are simply too good to leave out.

Perhaps controversially, Nemanja Matic has been selected as a shield for the back four but we feel the Serbian offers the most stable platform from which United can transition in attack. 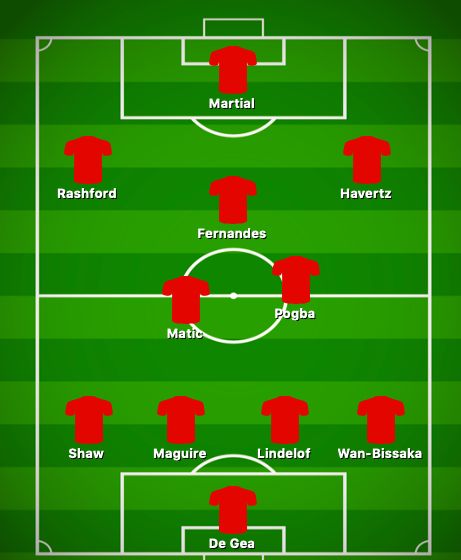