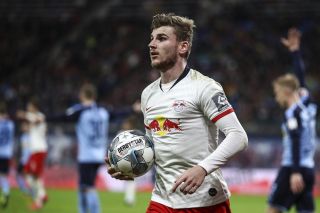 RB Leipzig striker Timo Werner is closing in a transfer to Chelsea and the news has the football world talking.

The German forward looked set for a move to Liverpool, but the Anfield club withdrew their interest and Frank Lampard seized his opportunity to close a deal for one of the most prolific forwards in Europe.

Sky Sports report that Werner has agreed a deal to move to Stamford Bridge after his £49.4m release clause was met by the West London club.

This transfer has particularly piqued interest of Manchester United fans, who know their club need to bolster their attacking options this summer and Werner was one of the most attractive options available on the market.

The Athletic suggested United held initial talks with the 24-year-old after it became clear he would not team up with Jurgen Klopp at Liverpool.

But there was never any significant breakthrough in negotiations and United have been left to focus their attentions on other priority targets.

And it has now become more apparent why United are not going toe-to-toe with Chelsea over Werner’s signature.

ESPN reported on Thursday that United ended their summer striker search after extending the loan spell of Odion Ighalo.

The Nigerian forward will now remain at Old Trafford until January 2021 after he was expected back at parent club Shanghai Shenhua for the start of the delayed Chinese Super League season.

The report suggests despite having monitored Werner, they are prioritising the signing of a versatile attacker that can play anywhere across the front three.

Moreover, in an exciting update for United fans, reputable journalist Sam Pilger has claimed United are not pursuing the Werner deal as they are growing in confidence that they can acquire their top target Jadon Sancho.

Sancho is the dream signing for many supporters this summer. The Borussia Dortmund starlet would solve Ole Gunnar Solskjaer’s key issue on the right-flank and complete one of the most dangerous forward lines across Europe including Marcus Rashford and Anthony Martial.

We presume most supporters will accept missing out on Werner if Sancho is brought to Old Trafford this summer!

Manchester United's refusal to pursue Timo Werner is in part due to their growing confidence they will sign their main target this summer: Jadon Sancho #MUFC

READ MORE: Solskjaer met Timo Werner over Man United transfer but there was one complication