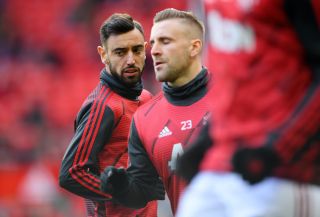 Anyone with a slight interest in football will be eager to see how Bruno Fernandes and Paul Pogba perform together in the same team.

Ole Gunnar Solskjaer is the man tasked with ensuring it benefits the team and helps Manchester United win football matches.

There are never any guarantees and Pogba is returning to a side on an 11-game unbeaten streak, so Solskjaer may have to drop one of the midfielders who had been performing well prior to the coronavirus outbreak.

United fans were beginning to show fondness towards Fred, who struggled to settle in his first two seasons at the club, and Nemanja Matic had a new lease of life since the beginning of 2020.

Answering questions from fans as part of a weekly diary on ManUtd.com, Luke Shaw revealed how impressed he’s been by January addition Fernandes’ performances in training.

Shaw is especially looking forward to seeing our Portuguese Magnifico connect with Pogba — since the two midfielders have yet to play together as the Frenchman spent much of the season injured.

“[Bruno]’s been so important, with the chances he’s created, the goals he’s scored and, hopefully, there’s still much more to come from him,” Shaw wrote. “I’m sure he’s still settling into the Premier League to an extent, which makes what he’s done all the more impressive.

“He was paired with Paul in a small training group last week, which people saw on the videos, and we saw flashes of what they were capable of.

“They’re probably two of the best midfielders in the [Premier League] right now, I’d say, so it’s going to be fascinating to see them play together.”

Pogba has only played 8 games this season, so fans will be hoping his return helps us qualify for the Champions League next season.