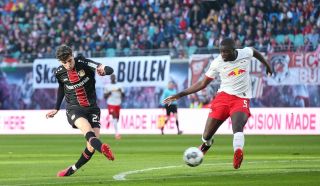 Manchester United have been linked with a move for the Germany international and respected football reporter Raphael Honigstein likened him to Mesut Ozil in his appearance on Beyond The Pitch. Others in Germany have compared Havertz to Michael Ballack, so a hybrid sounds very promising.

Honigstein shares a view that Havertz seems impatient and wanted a move out of Leverkusen last summer which gives the impression that he will want to be active in the market when the transfer window reopens.

In an interview with Marca, Rolfes said: “We don’t know yet what will happen to Kai. We know that all the great clubs from Germany and Europe are after him and that he has the ability to play anywhere.

“He is a fantastic player and for many years Bayern have always been behind the young German talents, but we have to wait, there are many factors that influence. His future is not decided at all yet.

“Kai has a contract until 2022 and we are calm. I can only say that I love him and that I like to see him play. I’d like to see him as long as possible with the Bayer Leverkusen shirt.

“I have no preference when it comes to other teams. He will be one of the great dominators of the game in the next 10 years.”

That’s a big statement from the Leverkusen chief — and he doesn’t give away any hints about how much they would demand for Havertz’ signature.

However, United’s pursuit of Jadon Sancho is well-documented and his Borussia Dortmund team-mate recently came out hinting that he is distracted, explaining why he hasn’t been starting many games for Lucien Favre’s side (via Metro).

Yesterday, the Manchester Evening News reported that the 20-year-old is open to joining United, seeing the transfer as a realistic option.

He plays as an attacking midfielder and on the right flank.

If United are looking to go all out for Sancho this summer, I can’t see both of these Bundesliga stars being at Old Trafford next season. It will be one or the other, maybe.