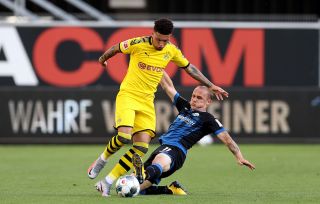 Although it has been revealed Liverpool baulked at Timo Werner’s £49m release clause (via Bild), the Independent claims money will be made available if Jurgen Klopp wants Jadon Sancho.

The Borussia Dortmund winger is seen as a priority signing at Old Trafford this summer, as per The Indy in a separate article by the same writer, Miguel Delaney, but it is now alleged that Sancho has been made aware of their current interest.

Finance is an issue for Liverpool so this depends on how badly Klopp wants Sancho, who can play anywhere across a front three, but is the German willing to sacrifice Mohamed Salah or Sadio Mane?

That’s what the Independent is referring to when saying ‘if’ funds are made available — but Delaney adds that Klopp has spoken to Sancho privately, telling him there would always be a place even if Salah and Mane stay.

I wouldn’t be too worried about this update because it states that there is a hope some deal can be done if United cannot secure his signature, even if it takes over a year for Liverpool to conclude.