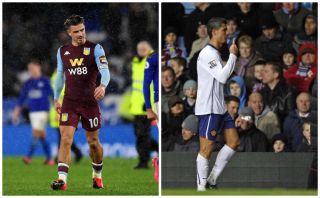 Aston Villa playmaker Jack Grealish has revealed he has looked to Manchester United legend Cristiano Ronaldo as an inspiration when it comes to dealing with abuse from away supporters.

The Villa captain wants to thrive off the hatred just like Ronaldo did during his time at Old Trafford.

Grealish is being heavily linked with a move to United this season after scoring seven goals and providing six assists for Dean Smith’s side.

Miguel Delaney of The Independent recently claimed that United have Grealish on a priority transfer list but are cautious about the optics of overspending in the transfer market following a global pandemic which will see a highly changed market in more ways than one. A relegated Aston Villa, for example, would have to compromise on Grealish.

Being one of the most fouled players in the top flight, Grealish is used to being on the receiving end of verbal abuse from opposition fans. Funnily enough he says he will miss this when the Premier League resumes behind closed doors.

It’s clear — from his interview with the Express and Star — that Grealish takes inspiration from Ronaldo and how he thrived on abuse from Villa supporters at Villa Park back when he played for United.

“I love all that,” Grealish said. “I love when people are on my back and targeting me.

“I always remember when I was a kid — and I am not saying I am anywhere near his level — but Cristiano Ronaldo used to come to Villa and the fans used to absolutely cane him.

As things stand, Villa are second from bottom but Grealish hopes they can get some momentum behind them and stay in the Premier League for another season at least.

“It is probably going to be a tough run-in,” he continues. “But there are also teams who have not got much to play for we are playing against so you can look at it two different ways.

“I am confident we will come back and play to the best of our abilities. We are looking fit as a team, probably fitter than we were at this stage in pre-season. We still have another two weeks and hopefully we can get fitter and more prepared than ever.

“I would probably stay it is a disadvantage, if I am honest, only because of how much we have thrived on the home games this year.

“We have won a lot more at home than we have away. We had six games remaining at home. We still have a game in hand and if we win the game in hand we are out of the relegation zone. It is not something we are going to sit back and moan about. It is still in our hands.

“If we win our game in hand [against Sheffield United] we are out of the bottom three and ready to go for the last nine games. We can’t moan about the fact we might have had the fans there. We will just take it as it is because we are just delighted to be getting back.”

Then Manchester United manager Sir Alex Ferguson described the abuse that Ronaldo had to deal with as like being “hit over the head with a bat.”

Fergie defended Ronaldo after he pointed one finger to the sky and another towards the number on his shirt — which some interpreted as a gesture to say he was the best player on the pitch.

United drew 0-0 with Aston Villa at Villa Park that weekend.

“Some criticise him, say that he couldn’t take it on Saturday, but I wonder how many people can take it if you’re walking down the street and someone hits you over the head with a bat,” Ferguson said, as per The Express. “That’s the mantle you carry when you’re a great player. He knows that and he gets on with it.

“I thought he showed admirable courage on Saturday. He always does, He was tackled many, many times, most of the time fairly, but there was a few occasions when he didn’t get the right (protection). Tell me someone who likes getting abused? Will you please point them out to me?”