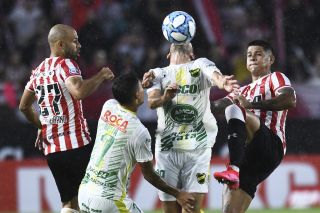 Although it is hard to envisage Marcos Rojo having much of a future at Manchester United, the Argentine defender is expected to return to Manchester United when his forgettable loan stint at Estudiantes comes to an end.

The Argentine club’s manager, Leandro Desabato, admits that an extension is unlikely given that he is approaching the final 12 months of his contract at Old Trafford.

Desabato has told Radio Late 931: “We have to wait, but Rojo is likely to leave.

“The loan is due, and if Manchester do not want to continue loaning, it’s understandable.”

The initial agreement with Estudiantes is due to expire at the end of June, and it’s not as if they will miss Rojo since he has made just one appearance due to the global coronavirus outbreak.

He returned to his homeland on a short-term deal during the winter transfer window and was caught in the middle of some controversy when he broke lockdown rules after being pictured playing poker and smoking with his friends.

United return to Premier League action in two weeks but Rojo is not likely to feature in many games even if he does return. He made only nine appearances in 2019-20 prior to being sent on loan.

With that in mind, Ole Gunnar Solskjaer will probably try to move him on this summer, but will Estudiantes want him on a permanent basis? It remains to be seen whether they can afford a transfer fee and his wages but I’m pessimistic on that front.