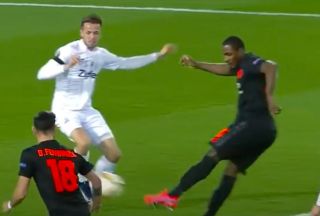 Many had feared the Nigerian fan favourite had played his last game in a red shirt as his short-term contract expired on Sunday.

But United confirmed via their website on Monday morning that Ighalo will remain at Old Trafford for at least another seven months after his loan spell was extended until 30 January 2021.

Ighalo was desperate to carry on playing for the club he has supported since he was a boy and has had his wish granted by Chinese Super League club Shanghai Shenhua.

His parent club had previously expected him to return to China ahead of their delayed season.

Many eyebrows were raised when United secured the loan signing of Ighalo as Ole Gunnar Solskjaer desperately scoured the market for a striker in the closing hours of the January transfer window.

And the 30-year-old has impressed in his first eight appearances for the club, scoring four times and proving more than adequate cover for injured talisman Marcus Rashford.

Ighalo could play a key role as a back-up forward for the Reds in the remaining nine games of the Premier League season.

See his highlights below, courtesy of United’s official Youtube channel: