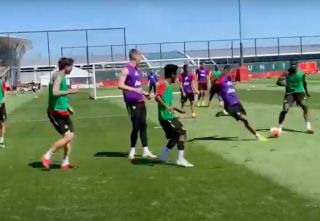 Manchester United are stepping up the intensity of their training sessions as we close in on the return of Premier League football.

There were several things worth noting from the short clip of the games posted on the club’s Youtube channel, including Mason Greenwood proving a point that he is raring to go for when United restart.

Greenwood will be vying for a place in Solskjaer’s starting eleven in the first-game against Tottenham and reminded us of his clinical finishing ability.

The teenage starlet collected the ball on the right-flank, where he has spent the majority of his game time this season, before outmuscling Victor Lindelof with relative ease and finishing low.

Lindelof has been criticised in the past for being brushed off the ball too easily and his weakness was exposed here.

Regardless, it was a classy goal from Greenwood and the video also gave us chance to see some more ice-cool finishing from Anthony Martial.

See the goal below from 30 seconds onwards, courtesy of the official Manchester United Youtube channel: