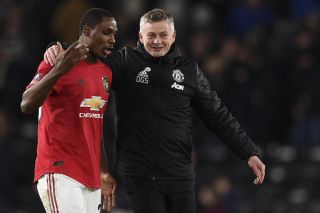 Odion Ighalo will remain at Old Trafford for the foreseeable future, according to respected Italian journalist Fabrizio Romano.

Romano has built a reputation for announcing transfer deals before they’re confirmed by clubs and he is rightly considered one of the most reliable journalists out there.

Ighalo has been in the gossip columns throughout this pandemic with the football season suspended. His loan deal was set to expire today and there was some uncertainty as to whether Shanghai Shenhua would agree to an extension because the Chinese Super League is scheduled to start next month.

The Nigerian joined the Red Devils on Deadline Day in January and went on to score four goals in his three starts for the club. He’s a goalscorer and one that offers Ole Gunnar Solskjaer something different when compared to his other attacking options.

Moreover, you can tell Ighalo loves being at the club and it would have been a shame in these circumstances for him to leave without finishing the job he started.

See Romano’s update below stating that United have reached total agreement with Shanghai.

Odion Ighalo’s loan to Manchester United will be extended until January. Total agreement reched with Shanghai Shenhua. The player has pushed to stay and the Chinese club just accepted United conditions to extend his loan. Official soon. Here we go! 🔴 #MUFC #ManUnited #transfers

Sky Sports have run a report of their own, backing up the information shared by Romano, but add that with border restrictions potentially preventing Ighalo from returning to China in time for the new season, Ighalo’s parent club have softened their stance and have allowed him to fulfil his dream by staying at Old Trafford.

It was suggested at the time that Solskjaer brought Ighalo in because Marcus Rashford’s was ruled out with a long-term injury, but the England international is fit for the return of the Premier League and the manager still wants Ighalo as part of his squad.

I’m confident that this will help boost United’s chances of finishing in the top four and going all the way in the Europa League — all in a bid to be playing Champions League football next season.

This extension should see Ighalo play in Europe’s most prestigious competition next season should the Reds quality.