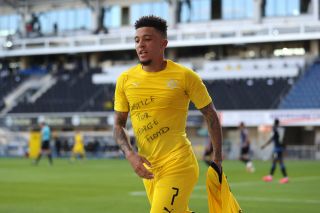 The murder of George Floyd has made headlines around the world, and there’s been a number of Bundesliga stars showing their support this weekend.

George Floyd was killed by a Minneapolis police officer on Monday. The officer in question knelt on the 46-year-old’s neck for 8-minutes and 46 seconds, as per BBC News, all while the victim pleaded for help.

I have had the privilege of discussing race and racism with his father Lilian on several occasions, and he taught me so much, not least about my own hidden prejudices; no surprise to see his son do this. https://t.co/MMGRbklxeh

The Borussia Dortmund winger unveiled a t-shirt in support of George Floyd following his first of three goals against Paderborn, as seen below courtesy of BT Sport:

Back in the starting line up, back with a goal! 🙌

Dortmund penalised Paderborn for losing position in their own half as Norwegian striker Erling Haaland drove forward and found Sancho inside the box for a tap-in.

His second came from an attack down the same flank but Sancho took a touch and carefully guided the ball past several defenders and the Paderborn goalkeeper.

His third came at the very end – marking exactly the return he wanted to the BVB starting line-up.

Another day, another Sancho masterclass! 🙌 pic.twitter.com/NZNqTi1Rxg

Dortmund ended up winning the game 6-1 and it was Sancho’s first start since the return of the Bundesliga.

All goals courtesy of BT Sport. 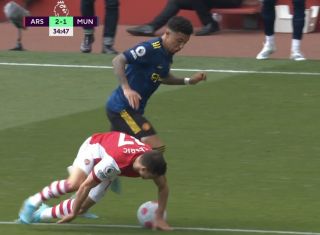