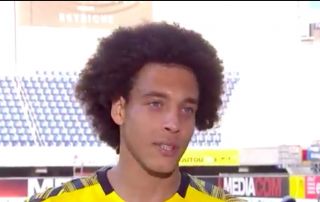 Manchester United target Sancho was back to his best as Dortmund’s far superior quality was exposed on Sunday evening.

It was Sancho’s first start since the Bundesliga’s return earlier this month, and his three goals take his tally up to a magnificent 17 for the season.

He proved yet again why United want him this summer to complete one of the most dangerous attacks in European football with Anthony Martial and Marcus Rashford.

Belgian midfielder Witsel came off the bench as Dortmund bounced back from the midweek defeat to Bayern with a 6-1 rout.

And in his post-match interview, he lauded coveted Sancho, describing him as one of the best players of his generation.

Listen to his thoughts below, courtesy of the Bundesliga twitter page:

"One of the best of his generation."