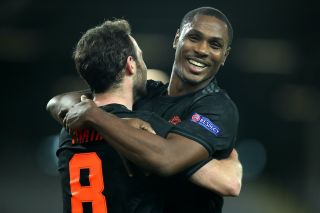 Odion Ighalo’s loan spell at Manchester United is set to expire today, although a report from Sky Sports suggests the club are close to agreeing a loan extension for the Nigerian striker.

United are in talks with Shanghai Shenhua over a proposed loan extension which could run until the end of January.

That means Ighalo is set to miss the majority of the 2020 Chinese Super League, which is scheduled to begin in July — when the Premier League campaign is due to restart.

Ighalo arrived at United in January of this year in a shock move on Deadline Day. The Red Devils were looking for a striker to come in after Marcus Rashford sustained a long-term injury, but the England forward should be fit by the time the league resumes next month.

That means Solskjaer could have a number of options up front for the remainder of the season.

Anthony Martial was in good form before the season was brought to a halt as a result of the coronavirus pandemic. It will be interesting to see how Solskjaer utilises all of these options if Ighalo’s loan deal is extended.

More when we have it.

READ MORE: Man United told how much they would need to pay to sign Brazilian playmaker on loan