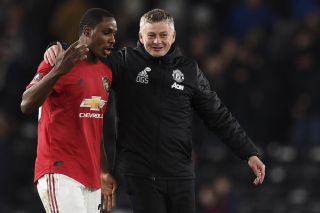 It was appearing increasingly likely that the Nigerian striker had played his final game for his boyhood club with his short-term loan contract expiring on Sunday.

But the Manchester Evening News report that the club have been working hard to find a resolution over his contract and a deal to extend his loan is getting ever closer.

Ighalo’s parent club Shanghai Shenhua were initially keen for the forward to return to China ahead of the start of the delayed Chinese Super League season next month.

But Ighalo has made it clear that he is desperate to pursue his United dream and will be aware that this is a once-in-a-lifetime opportunity to play for the club that he loves so dearly.

And it is claimed that he could now remain at Old Trafford for another seven months with his loan extended until the end of January.

This would mean as well as finishing this season, he would most likely play a part in the beginning of the next.

Ighalo established himself as a firm fan favourite with his four goals before the coronavirus suspension and many United fans are pleased that he is set to remain in Manchester.

Ighalo has great skill, experience and enthusiasm.
He has hit the ground running for us 🇾🇪 scoring goals and providing assists.
There’s a big goal or two in him, hopefully in a final.
A loan deal until January would be brilliant, Ighalo’s a class act and he won’t let us 🇾🇪down.

Hope this is correct. He’s been brilliant and allows us to play a totally different way with him at the spearhead when needed. The fact he loves the club and is living his dream is clear to see every time he sets foot on the pitch. So refreshing to see. 🙌🏼

He is that different kind of Striker that every team needs. Liverpool have Divock, Spurs had Llorente, and even when they are not exceptonial players, they can easily change a game

Extending Odion Ighalo’s loan is only fair, he has shown great professionalism and played very well in a short space of time for the club he loves. He deserves time to prove himself properly. It also allows time for chemistry to grow between Greenwood, Rashford and Martial.

Ighalo loan extension, I'm down with that! He's shown he can provide good cover for Rashford and Martial, doesn't need to be 1st choice necessarily, let's go! #MUFC #UTFR