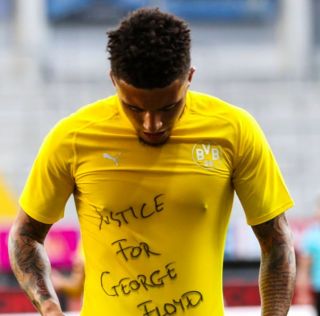 The 20-year-old reminded United fans what they are so desperate for with emphatic finishes, as Dortmund cruised to victory and put their midweek loss against Bayern Munich behind them.

Sancho, may not have been at his exhilarating best, but proved he knows where the goal is and took his tally in the league up to 17.

Each time the England international scored, he displayed a ‘Justice for George Floyd’ shirt in tribute to the 46-year-old man who was killed by a police officer in Minneapolis on Monday.

United’s interest in Sancho has been widely documented for over a year now; he has proven yet again he could be the perfect solution on the right-flank.

The Mirror report that Ole Gunnar Solskjaer is keen to add Sancho to his ranks this summer, but Dortmund are reluctant to part way with their starlet for below £100m.

Like plenty of other Reds on social media, we hope United can secure a transfer for Sancho this summer regardless of the uncertainty in the market as he could take Solskjaer’s side to the next level.

I hope to god we can get Jason Sancho to OT. He’d be a great addition to United. #mufc

Jadon Sancho in his first start for Dortmund:

Sancho gets a hat trick on his first start back. I don’t care if he’s our only signing this summer. Just get it done! #MUFC