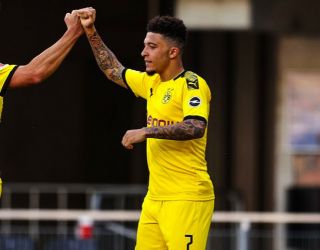 The winger was making his first start since the resumption of the Bundesliga after having to settle for cameos from the bench in his first few outings.

And his return was emphatic, as he netted three in a convincing victory as Dortmund exposed their superior quality.

Many will argue that Sancho wasn’t at his exhilarating best throughout, but the goals speak for themselves and his record this season is incredible.

The 20-year-old now has 17 goals and 16 assists in 22 starts in the league this season, a mightily impressive record for a player that is not an out-and-out striker.

Manchester United’s interest in signing Sancho this summer has been widely reported this summer and it’s clear to see why.

According to journalist Ronan Murphy, he is now the youngest player in Bundesliga history to score 30 goals.

This eclipses the record that was previously held by other sensational young talent Kai Havertz, who has shone for Bayern Leverkusen this season.

As reported by the Evening Standard, United are tracking both player this summer and Havertz could potentially be viewed as an alternative if they miss out on Sancho.

Anyhow, United would be fortunate to add either of the youngsters to the rank; both appear destined to reach the very top of the game.