It has been revealed that Memphis Depay delved into the world of sports analytics and football data intelligence when deciding on his next move after Manchester United.

Unfortunately, he couldn’t quite live up to the expectation of the fabled number 7 shirt at United, and decided to pursue the next step in his career after failing to establish himself as a first-team regular.

The forward made just one start in his final season at Old Trafford in a league cup tie before joining Lyon in the January transfer window.

Some fascinating new information has come to light regarding his transfer, with Depay determined to choose the right club in order to further his career.

Depay made contact with Giels Brouwer, founder of SciSports, a company that specialises in analytics and data intelligence, who has revealed what the youngster wanted for his next move.

“Memphis made the first laptop transfer by asking us for transfer advice with data,” Brouwer wrote on his Reddit AMA, as quoted by the Manchester Evening News.

“The agent of Memphis asked us to visit Memphis in Manchester where he was living at that moment. I went there with two colleagues and we watched a Champions League game on his couch. In our discussion about the next step in his career, he was really open about what he wanted and didn’t want. He wanted to play “more freely”, he wanted to be “important for the team” and wanted to play in a big five competition with a coach that had a clear playing style.

“We translated these questions into data searches. We looked for instance at his playing style at PSV and the Dutch national team and compared that with the playing style of Man United. We noticed that he was involved with a lot more defensive actions at Man United.

“Regarding importance of the team, we looked for teams who didn’t have their star player on LW or LCF. For playing style, we investigated consistency, speed of passing and transition, use of flanks and defensive line height of the defenders. One of his arguments was that playing style and development was more important than money.

“In the end, we wrote a report with five potential clubs that would suit his playing style and Lyon was one of them. Of course, it is up to the agent and the club to make a deal as our work ends there.”

As the report suggested, Depay has been a revelation at Lyon and many United fans have urged the club to resign him.

The Netherlands international has remodelled himself as a striker who also has the versatility to play anywhere across the front three, and has scored 38 league goals during his three year spell in France.

It’s just a shame that a player of Memphis’ talents couldn’t find his best form at United.

But the process behind his next move was well thought out and we wonder if other footballers will take similar steps when deciding on a transfer in the future with the sport driven by data analysis more than it has ever been before. 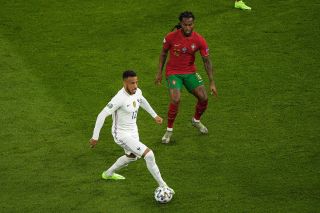