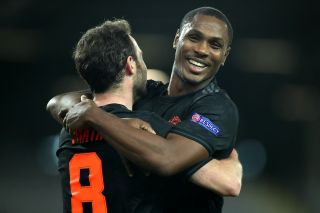 Odion Ighalo’s Manchester United contract expires on Sunday, but there is still hope he can remain at his boyhood club a while longer.

As noted by reputable BBC Sport journalist Simon Stone, talks are ongoing between Shanghai Shenhua and United with the hope that his loan deal can be extended until the end of the season.

Ighalo was expected to move back to China ahead of the start of the delayed Chinese Super League season next month, but is reportedly desperate to stay at Old Trafford.

Manchester Evening News report that Ighalo has already made a plea to Shenhua to let him finish the season at United before returning back to China.

But a resolution is yet to be found and this would appear to be a critical future hours in the Nigerian forward’s future.

Ighalo was hardly the most popular choice as Ole Gunnar Solskjaer desperately scoured the market on January transfer deadline day.

But his love for the club has shone through in his performances and we hope to see him remain until at least the end of the season. United are fighting on three fronts when football returns and Solskjaer could benefit from the extra attacking option to provide useful back-up from the bench.

We give you the latest updates on Ighalo’s future when we get them at Stretty News.