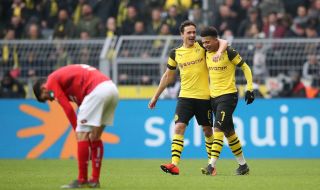 Thomas Delaney believes his Borussia Dortmund teammate Jadon Sancho’s form has been affected by the hype surrounding the teenager.

The 28-year-old has said Sancho is one of the best talents he’s played with throughout his career.

The England international has been strongly linked with a move to Manchester United and each day we search for new information from national and foreign press to see if there’s anything ground breaking worth reporting.

Unfortunately we’ve yet to find anything that fits that description but Delaney thinks his team-mate is feeling the pressure, and we can’t imagine the winger will be happy with these comments even if they are true. Usually footballers want fans to think they are focused on the job at hand — which for Dortmund is catching up with Bundesliga champions Bayern Munich.

“Clearly, one of the biggest talents that I’ve played with,” the Denmark international told ESPN. “With that talent comes a lot of pressure and I think he slowly starts to feel that from the England national team and clubs surrounding him now.

“Up until this point he’s been a talent performing very well, performing better that what he is expected to do but there was always going to be a next step and that’s going to be interesting. Next step in his career and his developement.

“Only looking at his skills, he definitely has what it takes to become one of the five biggest players in the world. You see big talents go to waste and I would say that he’s already done enough to prove himself.

“He’s 19 and he’s got the most goal involvement in the league together with Timo Werner and Lewandowski which is amazing but he should strive for more.”

Although he was returning from an injury, Sancho has been benched for all three of Borussia Dortmund’s games since the return of the Bundesliga season, the last being a 1-0 defeat to league leaders Bayern Munich.

But Sancho has still enjoyed another superb season at Westfalenstadion, contributing an impressive 17 goals and 20 assists for Dortmund across all competitions.

He is being valued in excess of €100m, which, in today’s market seems drastic. I’m not sure anyone will be spending that money on one player this summer.