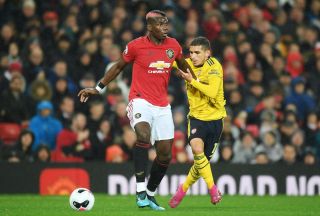 Scott McTominay has revealed what sets team-mate Paul Pogba apart from the rest.

Unfortunately we’ve not seen a lot of the World Cup-winner this season due to an ankle injury, which he ended up needing surgery for, but the players are already being put through their paces with the campaign likely to resume next month.

Speaking to United’s Box to Box, the Scotland international said (via Mirror): “You’ve got the physique and the presence to hold people off and the burst of speed where you can get through as well.

“There’s so many good examples of it in world football. Paul’s probably one fo the best examples of it, he’s very, very powerful and gets across the grass really, really quickly.

“It’s a dangerous tool to have in the middle of the pitch as well.”

From playing with different midfielders we’re sure McTominay will even try to add to his own game a bit. Like Pogba, he is physical and doesn’t get pushed around very often. This season he became a real leader in the dressing room — during a time the Frenchman would rather be anywhere but…

McTominay added: “For myself, someone who’s quite strong and a good runner, I should be testing teams more than I do.

“I should be breaking lines similar to what Paul does, drive into the box and create chances. We always have to have that balance of one goes and one sits, which is so important for a midfielder player.

“Being box-to-box, there’s some amazing examples: Zidane, Patrick Vieira, Roy Keane, driving through the middle of the pitch and were exceptionally good at it.

“For me, it’s important to keep watching clips like that, I get the guys to send them over as much as they can to analyse it.”

McTominay and Pogba are both back in training with manager Ole Gunnar Solskjaer hoping to have a fully fit squad for when the Premier League resumes.

If Solskjaer sets up his midfield with three players, who will miss out? Bruno Fernandes is certain to start but I think Pogba should be made work his way back into the starting line-up. Perhaps he will be able to do that now with a month of training because no-one is going to be fully match fit until they’ve all played a few matches again.