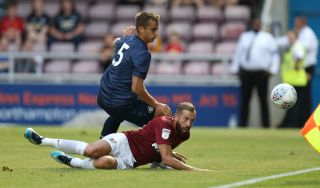 There’s more good news coming out of Old Trafford today with Manchester United deciding to trigger a clause to extend Luca Ercolani’s contract by one-year, as per ManUtd.com.

The defender, who has played for Italy’s U20 side five times, will remain at the club until June 2021.

Manchester United is an encouraging place to be for young footballers now. With Ole Gunnar Solskjaer at the helm, they know opportunities will come to those who work the hardest. That’s why I think we are becoming a lot more appealing in the transfer market and it has a lot to do with the work the Norwegian boss has put in thus far.

It’s early days but I think we are on the right path.

Ercolani will hope he’s on the path to first-team football and at 20 he will be hoping to make a breakthrough at some point in the near future. He joined the Red Devils in 2016 from Italian club Forli, following a successful trial at Carrington.

It doesn’t look like there will be a pre-season like we are used to before the 2020/21 campaign but we do hope to see Ercolani get his chance at some point.