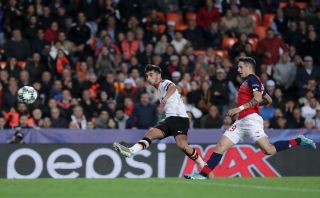 If you read Stretty News regularly, you will know Manchester United have been tracking Valencia winger Ferran Torres this season.

The 20-year-old has enjoyed his first season as a regular at Mestalla but it’s been another difficult campaign for the La Liga outfit. Still, Torres has excelled and is attracting interest from some of the biggest clubs in Europe.

According to The Athletic, Borussia Dortmund already had an offer turned down, while United along with Man City, Real Madrid, Liverpool, Barcelona and Juventus have followed the situation with interest.

Torres is out of contract in 12 months’ time and the coronavirus pandemic has definitely complicated matters further.

This is a situation which sees Valencia fans delighted to have a new star but they’re probably realistic in thinking it’s only a matter of time before owner Peter Lim cashes in on the youngster.

His current deal includes a €100m release clause, as per The Athletic, but if he’s ambitious and ready to make his way to the highest levels of the game, now is probably a good time to join a bigger club with a manager who will allow him to develop. Just like what Ole Gunnar Solskjaer is doing with so many of the younger players at United.

Moreover, the right winger fits Solskjaer’s transfer policy of signing emerging young talent and he is good enough to be a fitting alternative to Jadon Sancho, should United need to look elsewhere this summer.

There will be lots of competition for Torres’ signature when he decides to depart Valencia.

READ MORE: Opinion: Manchester United have led from the front during the crisis