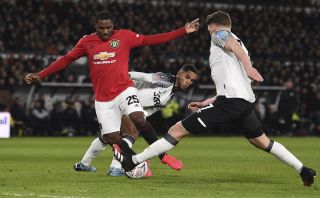 Manchester United have been dealt a significant blow in their attempts to extend Odion Ighalo’s loan.

Parent club, Shanghai Shenhua are reportedly demanding that Ighalo returns to China at the end of his loan spell which is due to expire as early as next week.

According to the Daily Mail, United’s last ditch efforts to retain Ighalo for at least the remaining domestic league games appear to have been scuppered.

Shanghai are set to recall Ighalo to their squad in time for the beginning of new Chinese Super League season, which they are well within their rights to do. It’s a new campaign and they are bound to take back one of their best players unless we buy him outright.

Despite reports that Shanghai would be willing to accept a bid in excess of £20mil for the striker, it is believed, no official bid has been made for the 30-year old striker.

It does now seem that unless United can convince the Chinese outfit to reconsider their stance, cult hero, Ighalo, has played his last game for his beloved United.