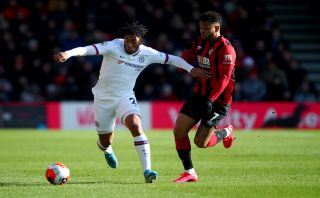 Ole Gunnar Solskjaer wants to build a squad capable of mounting a title challenge in the Premier League and a raid on two Bournemouth stars has been mooted.

Manchester United have shortlisted David Brooks and Josh King as potential alternatives to Jadon Sancho and Odion Ighalo, according to reports.

While Sancho remains United’s priority target for the summer transfer window, a move could ultimately hinge on whether Manchester City’s European ban is upheld.

Champions League football would provide the Red Devils with an extra £50m and it wouldn’t surprise us if our pursuit of Sancho was dependant on that — with the coronavirus crisis bound to have a negative affect on the transfer market.

United are also have a situation on their hands with Ighalo, on loan from Shanghai Shenhua, with the Nigerian striker set to return to his parent club at the end of this week.

The club will try to keep Ighalo until the end of the Premier League season, but no-one is wiser on the situation right now.

According to the Manchester Evening News, Brooks and King are on the shortlist of targets if the club can’t agree on deals for Sancho and Ighalo.

Brooks hasn’t featured this season due to an ankle injury but he is expected to return if the Premier League restarts next month. Last season he scored seven goals during his debut season for the Cherries.

I reckon it would be a lot easier to swing a deal for King, but Bournemouth will fight to keep hold of Brooks and I do wonder how much money they’d accept for his signature now we’re in such uncertain times and clubs will be trying to raise funds to allow for their own spending plans.

Still, I think if we miss out on Sancho this summer, attention should be put on Valencia winger Ferran Torres.