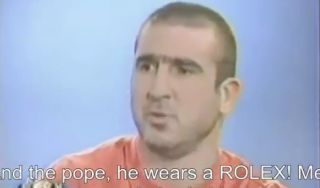 It is over 25-years since the day Eric Cantona launched himself into the stands at Selhurst Park and attempted to, quite literally, kick racism out of football.

Cantona did not complain about the red card he received after taking the law into his own hands. Crystal Palace defender Richard Shaw, who was their player of the season that season (1995/96), was locked into a personal battle with the Frenchman.

Throughout the match Shaw laid into Cantona a number of times, landing a series of kicks to his shin, but the referee did nothing.

When Shaw kicked him again, in the 61st minute, Cantona had enough and responded with a mildly petulant kick out. It resulted in a red card for Cantona after Shaw made a meal of the minimal contact.

Cantona accepted the decision and walked towards the tunnel. That is when Palace supporter Matthew Simmons rushed down rows of the stand to hurl abuse at The King.

Simmons later informed The Sun his exact words were: ‘Off you go Cantona — it’s an early bath for you!’ However, reliable witnesses came forward to suggest what he shouted was was a lot closer to: ‘Fuck off, you motherfucking French bastard.’ Quite a contrast.

So, Cantona kicked out and that moment will forever be played on our scenes as part of English football history.

The King would go on to say, “My best moment? I have a lot of good moments but the one I prefer is when I kicked the hooligan.”

Cantona faced backlash from the media following his nine-month ban from English football.

This morning we came across a his rant on French TV which sees him address the issue by hitting out at not only the journalists who bad-mouthed him, but the Pope to go along with it!

After his ban from English football, he went mental on French telly, told his critics to jog on, and said he’d piss in the Pope’s arse…pic.twitter.com/ZjX0XWDAy4