Manchester United’s return to training at Carrington this week has some fans excited over when we could see the resumption of the Premier League.

The Reds were on a fantastic 11-game unbeaten run before the indefinite suspension, but may find it challenging to continue the momentum when they return to action.

Ole Gunnar Solskjaer has several key selection dilemmas with the rare opportunity of selecting from a fully-fit squad.

Paul Pogba’s possible midfield partnership with Bruno Fernandes is what is particularly intriguing fans as the pair have not shared the same pitch since the Portuguese star’s arrival in January.

Amid the uncertainty around the coronavirus pandemic, it is looking increasingly likely that Pogba will remain at Old Trafford for at least another season and Solskjaer is bound to link up his two best creative outlets.

This leaves room for just one more player in the Norwegian’s preferred midfield three, and it would be harsh to leave out any of Scott McTominay, Nemanja Matic and Fred.

Matic has enjoyed a mini-renaissance since Christmas in a double pivot with Fred who has arguably been United’s best player this term. McTominay, meanwhile, was firing immediately upon his return from a lengthy injury before the hiatus.

Perhaps controversially, we have chosen Matic to protect the back four in the scenario where Pogba and Fernandes feature in the same-line-up.

Pogba would be tasked with playing a box-to box role similar to what Fred has done so well, albeit with a much higher attacking output.

We feel Matic provides the most stable of the three options while Fernandes and Pogba express themselves further forward, though he is certainly not the long-term answer and McTominay is more than capable cover.

Meanwhile, we have opted for United’s most dangerous counter-attacking front three and largely the same defence that has managed to keep nine clean sheets in that 11-game unbeaten run. 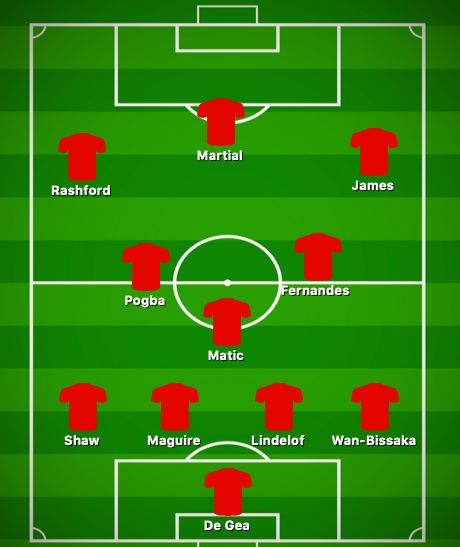 What’s your preferred United line-up when football returns? Do Pogba and Fernandes even get in the same team? Let us know by tweeting Stretty News.