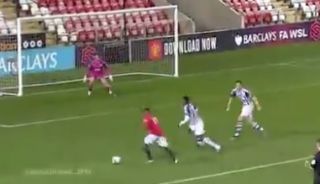 Largie Ramazani is another Manchester United academy talent that supporters can start getting excited about.

The 19-year-old winger made his first-team debut for the Reds as manager Ole Gunnar Solskjaer well and truly blooded the youth in the Europa League fixture away to Astana in November.

He has been in fine form for Neil Wood’s U23-side this term after making the step from the Under 18’s due to Mason Greenwood’s fast-track into the first-team squad.

Ramazani scored 9 goals and contributed two assists in the Premier League 2 before the season was curtailed due to the coronavirus outbreak.

Manchester Evening News report that United are eyeing a move for Shalke winger Rabbi Matondo if the huge deal for Jadon Sancho falls through this summer.

But perhaps the Reds could look to Ramazani, who is the same age and another raw talent who can play anywhere across the front three.