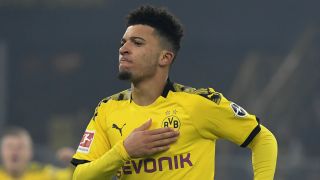 Respected journalist David Ornstein has revealed that United have been in ‘regular contact’ with the Bundesliga outfit, with Ed Woodward and Matt Judge trying to negotiate a deal for the talented player.

The Athletic reporter believes there is a high chance of the young England international will leave Dortmund this summer, and he has been in the Manchester United gossip columns for at least two years, so it’s hardly a surprise to hear that the Red Devils have been working on a deal to bring the right winger to Old Trafford.

Sancho left Manchester City in 2017 in a bid to get regular first-team football. Dortmund have built a strong reputation over the years for putting faith in young talented, giving them a big stage in the Bundesliga and Champions League to show the world their talents, and he has become one of their biggest success stories.

Now it sounds like he could be on his way back to the Premier League — but first United must meet Dortmund’s pricy transfer demands.

You can listen to The Ornstein & Chapman Podcast here — produced by the brilliant folk at The Athletic — but United fan account @utdreport has summarised the Sancho/United segment nicely below:

There is still a very high chance Jadon Sancho will leave Borussia Dortmund this summer. There is confidence from Sancho’s camp that an offer will arrive. #mufc have been in regular contact, and very recently #mulive [@David_Ornstein]

There is still a very high chance Jadon Sancho will leave Borussia Dortmund this summer. There is confidence from Sancho’s camp that an offer will arrive. #mufc have been in regular contact, and very recently #mulive [@David_Ornstein]

Ornstein does stress on the podcast that Sancho is not agitated by the situation, but there is confidence from his camp that an offer will arrive, and he won’t make a decision until the 2019/20 season is finished.

The former BBC Sport reporter doesn’t think Liverpool will make a move this summer – though it is noted by German journalist Raphael Honigstein that there is a chance that could change after the Premier League resumes.