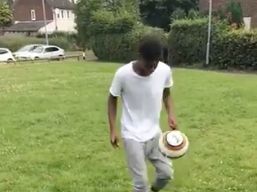 Marcus Rashford has shared a throwback from his teenage years when he was coming through the Manchester United academy.

In this old clip, a young Rashford showcases a range of showboating techniques with the ball.

You may need sunglasses to watch the video as Rashford’s boots back then were very bright!

The Manchester United forward was inspired into posting this clip after watching a young footballer do the same on Twitter.

It goes to show how talented he was as a kid — and it\s no wonder why he was promoted to the first senior squad at just 16!

READ MORE: Ji-sung Park reflects on how he and Patrice Evra became close friends at United

“Dortmund are in decent form,” – which pundit said this over the weekend about a team that hasn’t played in two months? Read more to find out.