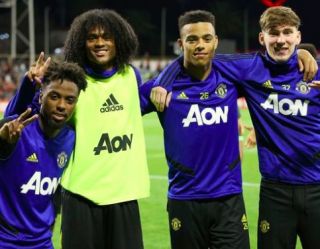 Manchester United could finally be about to use the loan market to facilitate the development one of their most promising academy stars.

Ole Gunnar Solskjaer may have been guilty of not allowing some youngsters that were unlikely to break into his side to go out and loan and play regular first-team football this season.

But according to the Manchester Evening News, a loan transfer is inevitable for midfield starlet James Garner next term.

Garner has starred in Neil Wood’s u23’s this season but his game time under Solskjaer has been limited to just three Europa League starts and one substitute Premier League appearance.

The 19-year-old has clearly out grown age-group football and his most likely destination for a loan spell appears to be the Championship.

The Sun report that Garner is attracting interest from Swansea City and Sheffield Wednesday.

It is noted that the youngster is known by staff at Swansea for his time at England youth level. They hope their reputation for nurturing young talent can persuade Solskjaer to sign off on the teenager’s switch to the Liberty Stadium.

Meanwhile, Wednesday also view him as an attractive option as they look to rebuild a team capable of pushing for promotion next season.

Garner is one of the most exciting prospects to graduate from United’s academy in recent years and won’t be short of potential suitors if he is indeed made available for loan.

We advocate the move and hope to see him continue his development and earn his place in Solskjaer’s first-team squad for the 2021/22 season.