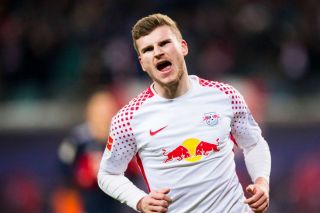 Every day there’s an update on German striker Timo Werner. He’s one of the best strikers in the Bundesliga which explains why so many clubs are interested in securing his signature.

According to The Athletic, Werner has decided it is Liverpool or nothing and he will not agree to join Manchester United.

The report claims United have spoken to the player to try convince him to come to Old Trafford but the 24-year-old prefers the idea of joining fellow German Jurgen Klopp. This was first reported a week ago by BILD journalist Christian Falk — who not only pointed out that Chelsea are also interested in his signature, but that Liverpool are yet to make the offer Werner is waiting for.

David Ornstein adds that Werner, who has already said no to Bayern Munich, has his heart set on Liverpool and is prepared to wait.

‘Werner’s situation is quite straight forward. The Athletic understands that his wish is to join Liverpool or stay at the Red Bull Arena for a further 12 months and revisit the matter in 2021’, Ornstein writes.

‘Werner is thought to have talked personally to Liverpool manager Jurgen Klopp, Manchester United and Barcelona, while his entourage spoke to Chelsea.

‘Although the Germany International is said to have been flattered by such admiration from sides he holds in the highest regard… based on factors including the coach, team-mates, playing style and environment, Werner has identified Liverpool as the best fit — on and off the pitch — at this stage of his career.’

Meanwhile German legend Lothar Matthaus has issued a warning to Werner to stay at Leipzig another season because he will be on the bench at Anfield. I’m not sure how true that statement is as Werner would probably get ahead of Roberto Firmino.

‘Jurgen Klopp likes fast players in attack and Werner has pace, but he has to play’, the former Germany captain told GOAL. ‘At Leipzig, Timo has his position. He is fixed player in the system of Julian Nagelsmann. But Liverpool are one of the best clubs in the world.

‘Sure, Werner could fit in at Liverpool but he likes to play the big games and he would have to get someone out of the team. I am talking about Mane, Salah or Firmino.

‘I think when all these players are fit to play, then Werner would sit on the bench, which is not good, as he is a player who loves to play all the time.’

The Athletic’s report suggest Werner would spend another year at Leipzig if it means getting his dream move to Liverpool.

It sounds like United fans can forget about this one happening…