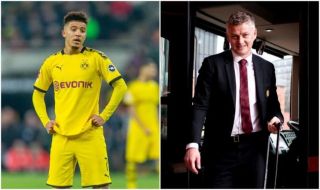 Manchester United may be leading the race to sign Jadon Sancho this summer, but it sounds like Borussia Dortmund are going to put up a fight in the transfer market.

Everyone has gone Bundesliga crazy with German football returning this weekend. There will be a number of football managers keeping an eye on events to see if they can spot any players to help strengthen squads in the summer. Ole Gunnar Solskjaer will be no different.

Unfortunately for United, Sancho doesn’t start but is named on the bench. There were rumours before the match that he had an injury and would be amongst the subs.

But when it comes to signing Sancho in the summer, German football expert Raphael Honigstein believes Dortmund are in a strong position, telling Standard Sport: “Dortmund’s business model does including selling players and they didn’t sell anyone last summer, so you’d expect them to make a big deal this summer.

“In all fairness they did expect the Sancho deal to happen this summer, but the question now is — which way is it going to go?

“There’s a view that I’ve seen reflected in some of the media coverage that Dortmund are desperate for cash and will sell, and the prices will come down, and United will be in a position to swoop — but I’m not sure that’s 100 per cent accurate.

“There’s a bigger chance that Dortmund will say: ‘You know what, the market is depressed.’ If you have a lovely house to sell and you can’t sell it this summer, why would you?

“The only thing working in United’s favour is that his contract is running down and they could make the argument that… there’s a discount to be had.

“But I would expect Dortmund, as they have often done, to find some kind of agreement with the player if that is the case, that they would maybe extent the contract by another year just to protect the value, the way they did with [Christian] Pulisic as well.”

When it comes to Sancho, Honigstein says that decision will come later this year.

He added: “Eventually it’s down to United; if United feel that they can get through this crisis relatively unscathed – and everyone expects the transfer window to be much later than usual – they might be in a position in August or September to say: ‘You know what, yes we are in the Champions League, football is coming back, we can do this now, or maybe we can only do it in January.’

“But I don’t think Dortmund will make the mistake of somehow rushing this because they need the cash – they are not in that position.”

If you watch the Dortmund game today at 2.30pm, Erling Haaland starts so it’s an opportunity to see him in action too.

We’ll have updates if any of United’s targets score goals etc.