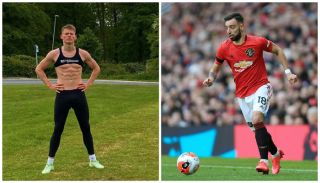 I get the impression that Scott McTominay would eat himself if he were made from chocolate.

That said, I think many of us would show off more were we lucky enough to possess a six pack. I’m talking stomach muscles, not cans of your favourite beer.

Fans are aware that McTominay is one of the fittest players at United — but many were taken aback by just how ripped he is.

The Scotland international appears to have been busy during his time in lockdown and he made sure to share a picture of his ripped physique on social media on Saturday.

Bruno Fernandes commented under the photo, saying: ‘Scottyyyyyy training with the ball is really important, don’t forget that’, along with a kissing emoji.

Our Portuguese Magnifico may have only joined United in January, but he is already considered a fans’ favourite at Old Trafford. We are all excited about the potential return of football and seeing United’s best players, including McTominay and Fernandes, all in action to fight for a top four spot.

McTominay is quite good with the ball at his feet but there’s room for improvement. Fernandes may not look like he does much weights but he can stand his ground. I think we’ll see more of that from him next term.