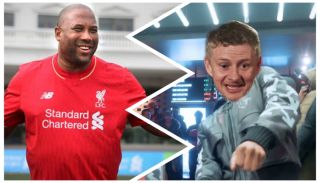 Not that any of us care for John Barnes’ opinions on Manchester United, this one is a laugh and we could all do with a bit of humour during these difficult times.

Barnes thinks United should stick with what they’ve got because they can’t sign world-class players.

What? How has he forgotten about the Portuguese Magnifico?

Here’s exactly what he told Bonus Code Bets, as cited by The Sun — make your own mind up.

“For example, 10 years ago, Liverpool signed a load of players, but none of them made the Liverpool side any stronger, and they weren’t good purchase for the long-term future of the club.

“Clubs will now resist the urge to just make signing just because they want to make signings, as in the long run, they won’t improve the team.

“At the current stage that United are in, they aren’t in the position to make the quality of signings they want, because those players won’t want to go there.

“They need to focus more on the players that they currently have and work on improving them.

“They have some players, with the likes of Paul Pogba, Marcus Rashford and Bruno Fernandes, but they need to make sure the harmony within the club and the team are right.

“I can say that United need to sign four world-class players, but they won’t get that, not with the club in its current position.

“They need the harmony to to align within the team which it hasn’t yet, this is what happened at Liverpool.”

With a Champions League ban hanging over Manchester City, fifth place may be enough to get United back in Europe’s most prestigious tournament. That alone would see world-class players interested in coming to United.

And if the Premier League restarts next month we’ve got a very good chance of getting top four.

With Jadon Sancho, I don’t think it will come down to Champions League. That has been suggested a lot in the media but if United meet Borussia Dortmund’s transfer demands this summer, he’ll be playing at Old Trafford next season.

As for Branes’ view on United, does he really not think Solskjaer can build a successful team by dipping into the transfer market and topping up his squad year-by-year?

If harmony is such a big factor he should take a look at United this season and the different the new signings have made. Harry Maguire is now club captain.

Moreover, I’d argue with Barnes any day why Bruno Fernandes, who arrived in January, is a world-class signing. What a load of baloney!

He doesn’t think Odion Ighalo represents value for money right now, adding: “When you think about Odion Ighalo, a proven goal scorer and has experience in the Premier League, then £20m is very good value in this market.

“However, if you are looking at the current situation with coronavirus and the transfer market, with a player who won’t necessarily start every game, he is not worth the money.”