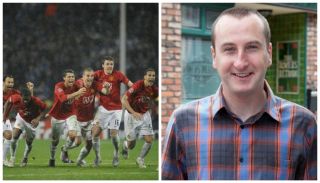 Welcome to the third instalment of Stretty New’s latest feature My Love for United. This feature is giving me immense satisfaction and has enabled me to really scour the United community far and wide to reveal some amazing stories, in this difficult lockdown period.

No doubt you will recognise my guest from your TV screens one way or another but I am thoroughly delighted to be able to share an entertaining story from the one and only Andrew Whyment.

I had been talking to Andy for a little while before I chanced my arm and decided to ask him whether he would fancy contributing to the feature. Many drew this impression of Andy, especially on I’m a Celebrity, as this incredibly down to earth guy and he became somewhat of the nation’s darling. I am so happy to confirm that is exactly the case and Andy was all too happy to oblige.

He is an absolute diamond, a massive red to match, and I really hope you get as much enjoyment from reading his story as I did.

So, without further ado, this is Andy Whyment’s Love for United:

Hi Andy, for those who aren’t familiar with you, tell us a bit about yourself.

I’m Andy Whyment I’m known for playing Darren on the Royle Family and Kirk Sutherland for the last 20 years on Coronation Street, I also came 2nd in I’m A Celebrity 2019.

When did you start supporting United and what was your first match?

I’ve always supported United but only started taking a proper interest when I was about 6, my first match wasn’t actually watching the 1st team I went to watch the youth team in 1992 with my dad when they won the cup.

United definitely runs in my family, my grandad and his two sons support City but my dad is a big red and brought me, my brother and sister up supporting United. My sister isn’t too bothered anymore but me and my brother Mark are, although there’s only me who goes to the games at Old Trafford now, I sit with friends though so it’s not like I’m on my own.

Who is your favourite United player of all time?

That’s a tough one… we’ve had some fantastic players over the years but when I first got into watching United I idolised Bryan Robson: For me he was a fantastic player, for excitement though I have to give Cristiano Ronaldo a mention too, every time he got the ball you were on the edge of your seat because you’d know something special could happen.

My favourite current player I’d have to say Bruno Fernandes, the reason being is I think the Premier League is a very tough league to play in and the way he has settled in is amazing really, if you look at the likes of Vidic and Evra it took them a good 6 months to get to grips with the Premier League but Bruno looks like he’s been playing here for years, he’s certainly made us a much better team since signing in January.

Who is your most hated rival and opposition player of all time?

Most hated opposition player I’d have to go with Martin Keown myself, ever since Ruud missed the penalty at Old Trafford and Keown jumped into him the way he did I wouldn’t say I hate him but I certainly disliked him from that point, he might be a really nice guy but as a player after that I didn’t like him.

The opposition player I’d like us to sign is Jack Grealish. I think he’s a very talented player, he’s the most fouled player in the Premier League which says a lot and he picks some great passes in and around the box, he wouldn’t cost ridiculous amounts of money either and I feel he’d definitely make us a better team with him in it.

What is your favourite United match of all time?

My favourite game was the Champions League final in Moscow. I’ve never been through so many emotions watching a game! We should’ve been out of sight in the 1st half we battered Chelsea and had loads of chances. Then obviously the game ends 1-1 after extra time- Drogba has been sent off, the one player you’d expect to score a penalty was Ronaldo and he missed, then Terry steps up when it should’ve been Drogba and slips and misses. When Van Der Sar saved Anelka’s penalty I found myself hugging a Russian steward at the side of me! I hadn’t slept in about 20 hours but to be there was unreal, the game had everything, obviously ’99 was unreal too but I wasn’t at that game.

Are you Glazers in or out?

I’d say I’m more Glazers out but they own the club and I don’t feel they’ll be going anywhere until they want too.

Do you think Ole is at the wheel long-term?

I really hope Ole is at the wheel long-term, I think he has a vision of what team he wants and in my opinion he should be given the time to build it. The four players he’s brought in i.e Maguire, Wan-Bissaka, James and Fernandes have all done really well and he’s certainly getting the best out of Fred too. I think with a couple more transfer windows and with the players that are already at the club I’ll think we’ll have a very squad.

And finally… was there much football bantering in the jungle with Ian Wright? Would you rather have won I’m a Celebrity or scored a goal at Old Trafford?

We had plenty of talk of football in the jungle but they didn’t show any of it unfortunately, Ian Wright is a top bloke and it was fascinating to hear some of his stories from his career.

I’ve already been lucky enough to score a goal at Old Trafford and my kids were there to see it although they were both very young! Ricky Whittle took a penalty and it was saved but I ran in and slotted it home, I was absolutely buzzing! I would’ve loved to have won I’m A Celebrity but I’ve had so many people saying I was robbed and should’ve won so that makes me feel very proud indeed.

He was robbed indeed…

Once again, a huge thank you to Andy for sharing his United stories with me. It was a real privilege to interview him.