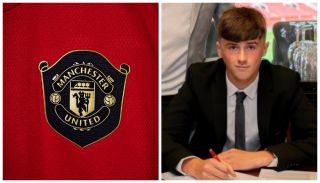 Charlie Wellens has signed a two-year deal at #MUFC. The 17-year-old – son of academy graduate Richie Wellens – was linked to Inter Milan earlier in the year

The 17-year-old is a central midfielder who signed a scholarship with United last summer after impressing in the club’s academy system. He has gone a step closer to the United first-team by signing his first professional contract at the club.

Like his father, Richie Wellens, who graduated from the United academy, his preferred role is in midfield. Peach adds that he was linked with a move to Inter Milan earlier in the year.

Wellens earned this two-year deal after a fulfilling season with the Under-18s before the league campaign was cancelled. He started all four of United’s FA Youth Cup ties, with a semi-final against Chelsea still in the pipeline if the season restarts next month.

Richie made one appearance for United’s first-team and he currently manages Swindon Town. Taking to Twitter, the 40-year-old expressed his pride at his son’s commitment to the club:

23 years ago I signed my first professional contract at the biggest club in the world,to say I’m proud to see Charlie sign his is an understatement well done mate it’s only the start but you deserve it 👏🏻👏🏻 pic.twitter.com/fWVi6Bg1fv

A lovely father and son moment which I’m sure they shared together and will never forget.

The younger Wellens has already trained with United’s first-team, as per Manchester Evening News, on the eve of the Europa League opener against Astana in September.

This is a quality moment for the young man and he’ll be buzzing to get back playing to get better.

Solskjaer is in the process of building his squad and is using plenty of youth players. This is an encourage sign for younger lads who have a chance of joining the Red Devils at some point.

All you’ve got to do is look at how Solskjaer integrated youngsters Mason Greenwood and Brandon Williams in the first-team this season.

He deserves a lot of credit for that but there’s still a long way to go.

READ MORE: Man United can give Angel Gomes reason to stay with one transfer decision