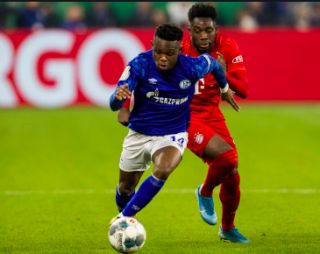 Manchester United are pressing ahead with their plans to sign priority target Jadon Sancho this summer.

As reported by the Manchester Evening News, the club are ready to capitalise on their enviable position in the transfer market amid financial uncertainty and Sancho is one of three targets that are viewed as attainable.

But manager Ole Gunnar Solskjaer will need to prepare for the possibility of the club missing out on the Borussia Dortmund superstar and look at other options.

And according to the latest reports in the MEN, there is another Manchester City academy graduate that is taking Solskjaer’s fancy.

FC Shalke winger Rabbi Matondo has been viewed as an alternative to Sancho and his situation is currently being monitored at Old Trafford.

The 19-year-old left City on last year’s January deadline day and has established himself as a squad regular under ex-Huddersfield Town boss David Wagner in Germany.

While he has only spent a year in the Bundesliga, it is believed he would be interested in a move back to Manchester.

The Wales international is also good friends with United forward Daniel James and is regarded as a much cheaper option than Sancho this summer.

Matondo is a raw talent and certainly has the ability to get fans off their seats at Old Trafford.

But many fans would still love to see Sancho as despite the fact he is just 20-years-old, he has already established himself as a superstar within the game and would offer the perfect solution to the void on the right-wing.