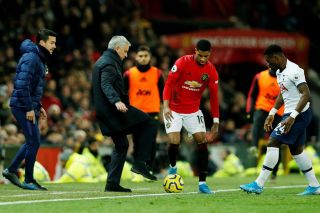 Manchester United’s trip to Tottenham is being lined up as the Friday Night Football match to signal the return of the Premier League next month.

There has gradually been increasing talk of a return to action in June but you will be able to feast your eyes on some quality football this weekend with the Bundesliga back.

Check out our four Bundesliga matches this weekend United fans should keep an eye on, with reasons to excite you for each. The biggest factor is we all want our fix of football because he’s been so long, but most importantly we hope it’s safe and no players in Germany are put under serious risk of picking up the virus.

There is nothing set in stone as of yet in the Premier League and much depends on what happens as the measures are relaxed, and the impact that has on COVID-19 numbers. One step forward — at the wrong time — could lead to more than one step backwards.

Stretty News columnist Brian Murphy wrote an interesting piece this week urging the Premier League not to shut the door on fans.

That’s why we feel there needs to be real caution when a decision is made. The Premier League is the biggest domestic league in the world. It needs to lead by example.

However, according to the Daily Mail, United’s trip to Tottenham could be the kick to kick things off on a Friday night (either June 12 or 19). The match was originally set to be played on March 15 so it is set to be rescheduled.

The report adds that there could be four matches played on Saturdays, another four on Sunday and a Monday Night Game with all fixtures to be played behind closed doors and televised or streamed online.

Do you think the Premier League will return? Let us know via Twitter (@StrettyNews).

Former United right-back Gary Neville has called on the Premier League officials to delay restarting the 2019/20 campaign until at least July 1 as coronavirus-related problems continue to mount up.

Neville told Sky Sports, as quoted by Manchester Evening News: “I don’t think anybody is clear whether it’s in football or in the country/ I think there are employees, families up and down the country who don’t know what they should do.

“If you’re a Premier League owner, I don’t think anyone would be sticking their hand up saying ‘let’s get back playing next week’. I think they need to think about delaying for a few weeks or maybe even a month or two.

“Instead of a June restart, maybe more about a July start. It just feels like the pressure is coming on top a little bit, the walls are closing in, that a decision has got to come.