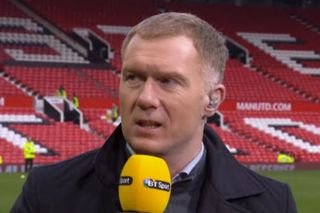 Harry Kewell came close to signing for Manchester United instead of Liverpool, but Paul Scholes has revealed that it didn’t bother him seeing the Aussie leave one rival for another.

To this day, I highly doubt anyone is losing sleep over this one… except Kewell maybe.

The winger impressed at Leeds with goals and assists, but at Liverpool he flopped after joining in 2003. That certainly helped Scholes and the other United lads that Liverpool didn’t exactly benefit from his arrival.

Kewell suffered with injuries and found it difficult to get his Liverpool career off the floor.

I recall watching him at Old Trafford, for Liverpool, and trying to recreate Cristiano Ronaldo’s step-overs. He failed, did one or two in super slow motion to which the Stretford End could only laugh.

“I always remember two or three who were coming. I remember Harry Kewell was one and you knew what a good player he was,” Scholes said on Savage Social, as quoted by the Liverpool Echo.

“He was brilliant. I think he ended up turning us down and going to Liverpool which didn’t really bother us that much.”

The highlight of Kewell’s football career came at Liverpool when he won the Champions League in 2005. He missed the second-half with injury that night but still has a winners’ medal to show for it.

Kewell is now the manager of Notts County — competing in the National League, the fifth tier of English football.