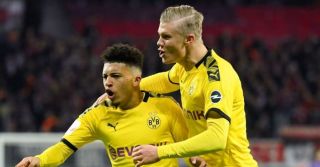 Manchester United fans will have their eyes on the Bundesliga this weekend for a number of reasons.

The first being the return of domestic football. We’ve all missed it regardless of our opinions on whether now is the right time with the coronavirus pandemic still very much a thing.

On Saturday German football will return as they attempt to finish the current campaign which was brought to a halt amid the COVID-19 pandemic.

Below we look at five matches United fans should keep an eye on in the Bundesliga this weekend.

You don’t want to miss the Revierderby between Borussia Dortmund and Schalke. It takes place on Saturday May 16 at Signal Iduna Park, 2.30pm BST. Not only do we expect Jadon Sancho and Erling Haaland to start the game, United fans may want to see what Schalke’s Rabbi Matondo has in his locker. According to the Manchester Evening News, United could see Matondo as a cheaper alternative to Sancho with transfer spending set to be cut throughout world football. The 19-year-old has had spells with Cardiff City and Man City in the past, but is now renowned for being one of the young British talents who benefited from moving abroad to develop their game. Sancho-lite, anybody?

Freshly reported by Sky Germany, cited by The Metro, United have stepped up their efforts to sign Monchengladbach striker Alassane Plea and discussions have begun with the striker’s entourage to check whether a move would be possible ahead of the 2020/21 season. This match takes place on Saturday too, but it’s a later kick-off (5.50pm). The report adds that Monchengladbach have the player tied to a contract until 2023, valuing him at around €24m (£21m).

Unfortunately, this match kicks-off the same time as BVB vs Schalke but with the power of the internet these days it’s pretty easy to stream two games at once from the comfort of your homes. Timo Werner and Dayot Upamecano have both been linked with the Red Devils in the past. Since many of us will be using the Bundesliga this weekend to get our fix, I’m definitely going to be taking a look at some of the players we’ve been linked with, which brings us to our final match to watch this weekend.

This game is not scheduled until Monday night — so it doesn’t clash with any of the other games (Bayern Munich are away to FC Union Berlin on Sunday at 5pm)! Use this as your chance to see Kai Havertz in action. The midfielder was only hitting top form before the season was suspended. I don’t think we’ll get him this summer but he’s still a talent to keep your eye on.