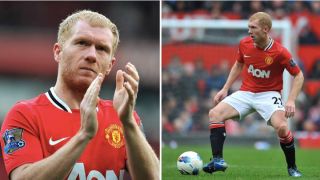 Former Manchester United midfielder Paul Scholes thinks Real Madrid duo Luka Modric and Toni Kroos are the two modern-day footballers whose style of play is closest to his own.

This makes you think about David Moyes wanting Kroos to join him at United, or Sir Alex Ferguson’s attempts to sign Modric, who preferred a move to Real Madrid.

Scholes was a key figure throughout his career which only saw him play for one club, winning multiple trophies to become one of English football’s most decorated players, with an ability to connect play through the middle from deep as well as making his way forward to hit the back of the net.

He has full admiration for Modric and Kroos — suggesting they are his natural successors in the way they play the game.

Scholes told the BBC (via GOAL): “I’d like to think I played a little bit like Luka Modric. He’s different to me because he was quicker than me, he can beat a man, but I see certain traits in him, like controlling the game.

“It’s probably more towards Toni Kroos, as a passer and more of a controlling player. He doesn’t really get involved physically with people and scores the odd goal here and there. I think if I had to choose between the two I’d be more like Kroos than Modric.

“When I watch those two for Real Madrid in those great European Cup winning teams, they’re the two.”

The two players in question had better international careers than Englishman Scholes, who was under-appreciated during his time with the Three Lions, earning 66 and scoring 14 goals. Kroos won the 2014 World Cup with Germany and Modric helped Croatia reach the 2018 final before losing to France.

This Legendary trio cost us only €61m