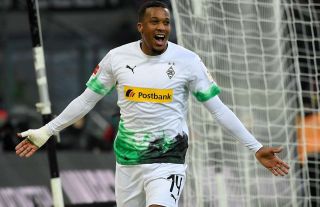 Alassane Plea’s entourage have been in contact with Manchester United over the forward’s future.

According to Sky Germany (cited by The Metro), the Red Devils have upped their game to sign a striker and discussions have begun with the Plea’s representatives to check whether a move would be possible ahead of the 2020/21 season.

The France international was having an excellent campaign with Borussia Monchengladbach when the coronavirus pandemic brought football to a halt back in March, but the forward returns to action this weekend with the Bundesliga set to return.

The first game back for Monchengladbach is against Eintracht Frankfurt, Saturday 16 May, 5.30PM GMT.

Aged 27, Plea is older than a lot of strikers United have been linked with signing this summer, and he should be hitting his prime right about now.

He’s younger than Odion Ighalo, whose future remains up in the air, and could carry out a back-up-rotation role in the squad with Ole Gunnar Solskjaer putting faith in Anthony Martial.

Ighalo’s arrival gave Martial a kick up the backside and he responded with goals. Even better, Ighalo chipped in with a few too. If United can have two strikers competing for places and scoring goals, Solskjaer will be able to take this team forward.

The Metro claims Monchengladbach have the player tied under contract until 2023, and he is valued at around €24m (£21m) by the Bundesliga side.