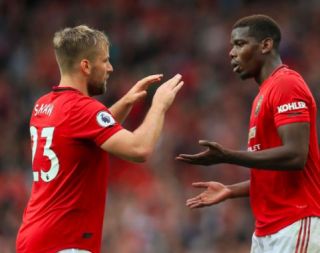 Manchester United defender Luke Shaw thinks teammate Paul Pogba has all the attributes to become the best midfielder in the world.

The left-back, who was playing some of his best football for the Reds before the coronavirus outbreak, believes that the Frenchman is the toughest player to train against in Ole Gunnar Solskjaer’s talented squad.

Shaw is familiar with coming up against the most skilful players in the Premier League as well as dangerous attacking players such as Mason Greenwood, Marcus Rashford and Anthony Martial in training.

When asked who he fears most in training sessions, Shaw explained how he thrives in the challenge of facing tough opponents but detailed what makes Pogba so tricky to mark.

“I wouldn’t say ‘fear’ is the right word because I enjoy playing against the likes of Rashy [Rashford] and Martial because they’re tricky, high-quality players and I like that challenge of facing them,” Shaw told the club’s official website.

“Every time I’m facing Anthony, I like to have a little joke around with him, talk to him a lot and tell him: ‘I’m coming for you’.

“Actually, probably the hardest player to get the ball off is Paul. He’s so big, strong, he’s got quick feet. To be fair, he’s got everything to be the best midfielder in the world.

“You could ask any player in the team about that. I’d have to pick Paul as the toughest one to train against as well because it’s so tough to get the ball off him – he knows how to shield it away and he’s also got the best quality to deliver shots and passes too.”

Pogba has all the ability in the world and it’s frustrating to see that he hasn’t managed to consistently transfer his prowess to the pitch in his four years at United since his return from Juventus.

The 27-year-old has been keeping the rumour mill spinning during this football hiatus with moves to Real Madrid and Juventus touted.

But the financial uncertainty around the transfer market means Pogba could stay at Old Trafford for at least another season. Solskjaer could therefore take the opportunity to build a midfield around his two supreme talents in Pogba and new signing Bruno Fernandes.

READ MORE: Man United could be about to lose starlet Angel Gomes to Chelsea on free transfer