Following Tottenham’s move to their new stadium last year and against a background where both Real Madrid and Barcelona have ambitious ground improvement projects, some have seized on the apparent comparative poor condition of Old Trafford, seeing it as metaphor for the lack of ambition underpinning the deteriorating trajectory of Manchester United.

The image of water pouring onto seats in the hour preceding last season’s home derby was a source of mirth for opposition fans but cause for real concern amongst Reds. Failing to ‘fix the roof whilst the sun shines’ is a telltale sign that the current landlords are suffering from the myopia of the present and not thinking about looking after the club’s future. Suffice it to say workmen were busy on the roof last summer following the outcry.

The fundamental problem with any proposed expansion at Old Trafford has of course been the South Stand and the issue with the railway. The costs were already prohibitive and that was pre-virus, so it now looks likely that little will change in the foreseeable future. The club have been talking about the merits of protecting the heritage of the ‘old’ stadium. Looking across the pond such arguments do resonate in baseball when you think about the Boston Red Sox and the mystique of Fenway Park for example, but that genuinely is an old stadium. Most of Old Trafford is less than 30 years old but is already looking shabby.

Don’t get me wrong, I totally get the sentimental attachment to playing on the same pitch as the likes of Edwards, Best and Cantona but there will come a time when it becomes no longer viable. Manchester United is different and there is undoubtedly a romance about Old Trafford that is intrinsic to the history of the club but as one famous Bostonian once said, ‘those that look only to the past or present are certain to miss the future’. As fun as the old days were in the ‘wonderfuel’ days of the old Stretford End, we moved on and we will need to again. 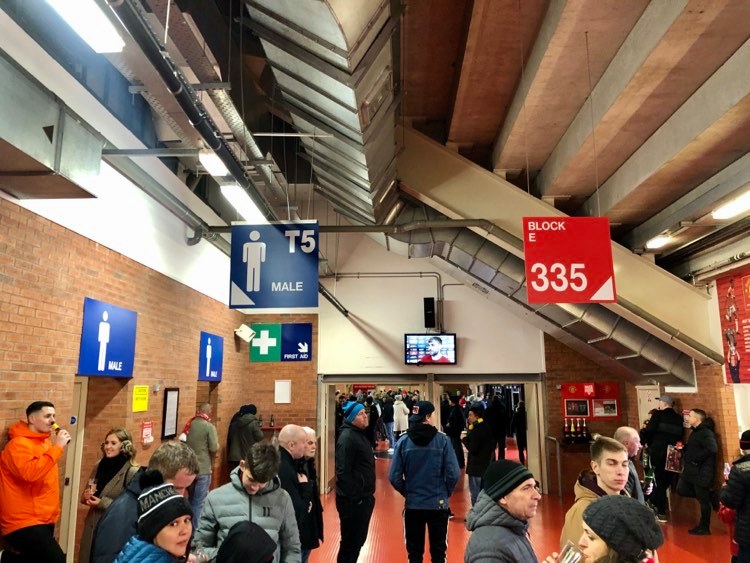 Looking at the example set by Tottenham, there is some support for the idea of building a new stadium as close to the footprint of Old Trafford as reasonably practical. That would likely involve a lengthy tenancy at the Eithad but we have been there before and played at Maine Road for an extended period during the immediate post-war years. Whilst capable of catering for the ‘demand’ at City for  season tickets, United is a completely different matter. Whilst there are often empty seats for City games, for United to play there for two or even three seasons would mean there would likely have to be some sort of rotation scheme for season ticket holders, which would be just as controversial as playing in Beswick in the first place.

Starting afresh would put us in a strong position for the future, a larger capacity, world class hospitality and overall just a better experience. There is no question that sitting in most parts of the stadium feels cramped and when you look to heavens for divine intervention (quite common of late) you catch a glimpse of the corrugated roof, which just reinforces the feeling of a stadium in rapid decline.

I visited Tottenham’s new ground last year to catch an NFL game and the contrast was stark. Going through the turnstiles you are greeted with an extensive range of modern concessions including real ale offerings brewed onsite, with London prices admittedly. At your seat you do get taken aback by the impressive view and acoustics all of which have been designed specifically to maximise the experience. It just feels obvious to think that Manchester United should be at the forefront of a progressive approach to match experience, but we simply are not. We do not even have a video screen which in the age of VAR is woefully out of step.

Back in the East Stand at Old Trafford ascending what feels like an assault on the north face of the Eiger, I climb the stairs surrounded by breeze blocks whilst fantasising about the escalator at Wembley. Arriving at the concourse I then have the tricky decision of a soggy pie or maybe a piece of cardboard with some tomato sauce on it. I wonder when it will sink in that if you have thousands of captive punters, selling them quality food and drink is going to have a positive impact on your margins. That kind of revolutionary business thinking is evidently beyond reach for the current regime. As a minimum it is surely possible to sell a decent pint?

As the Glazers are little capable of keeping us dry little alone ready to dig deep to fund an astronomical budget for a new stadium, the only way this is going to happen in the post-virus era is when Old Trafford has new owners. It will definitely happen, the question is just whether that will be in the next ten years or fifty, in the interim we will need to get used to ‘shabby chic’.